A blog by John Boyer and Mike Norris.

It is important to have the Cognos Auditing capability working to know and understand how Cognos is being used by your user community and help answer questions like:

Considering how critical it is to maintain healthy Cognos Analytics environments, surprisingly little has been written about its auditing database beyond the standard product documentation. Perhaps, it’s taken for granted, but organizations that use it know that over time querying the Audit Database tables will start to slow – especially if your organization has a lot of users running lots of reports and has lots of history. What’s more is that the audit activity logging itself may be delayed because it is being queued when it can’t be added to the database quickly enough, for example. That’s when you start to think about database performance as you would with any operational database that has reporting requirements.

Large tables typically slow query performance. The larger the table, the longer it takes to insert and query. Remember that these tables and the Audit Database are basically an operational database; writes are happening frequently and work against us as we can’t focus them for only read operations as you would with a data mart.

Much like the content store, the health of the Cognos environment must also take into account the health of the Audit Database. Unbounded growth of the Audit Database can become an issue over time and may eventually even impact the overall performance of a Cognos environment. In many organizations with external regulations thrust upon them, not having a full audit record can land them in a non-compliance situation with heavy repercussions. So how do we deal with having to maintain so much data for historical auditing purposes — in some cases up to 10 years — yet still get the reporting we need to maintain the environment and keep users happy with the performance?

All this means that it’s not just the reports which rely on the Audit Database which suffer, but often the entire system. If the Audit Database is on the same server as the Cognos content store, performance of all things Cognos will be affected in that environment.

If you don’t, yet, have Cognos Audit installed and configured, Lodestar Solutions, a Motio partner, has an excellent post on enabling Audit in Cognos BI /CA.

There are some possible solutions that quickly present themselves:

We’re not going to deal with option 3. Option 2, deleting the data, is not a good option and I’d recommend keeping at least 18 months’ worth at a minimum. But, if you’re so inclined, IBM provides a utility, AuditDBCleanup (Cognos BI) or a script (Cognos Analytics) which will do exactly that. The utility for Cognos BI deletes records based on a timestamp while the scripts for Cognos Analytics just delete the indexes and tables.

The recommendations we’ve made to clients previously on this were to separate into two databases:

In short, the process runs weekly to move most recent records from Audit Live to Audit Historical. Audit Live starts over as a blank slate after this process runs.

Using this approach, there is no implicit “stitching together” of the Live data and the Historical data. I would argue that you probably want to keep it that way.

In Cognos Administration, you can add two different connections for the Audit Data Source. When a user runs a report against the Audit package, they get prompted for which connection they want to use:

On the off chance you want to look at live audit data rather than historical audit data, you just pick the “Audit – Live” connection when prompted (should be the exception, not the norm.)

If you REALLY also want to provide a consolidated view of both Live and Historical, you could do so, but it would impact performance.

For example, you could be create a 3rd Database called “Audit – Consolidated View” and then , for each table in the Audit schema: create an identically named view that is a SQL union between the table in the live DB and the table in the historical DB. Similarly, this could also be achieved in the Framework Manager model, but, again, performance would be a key consideration.

Some of our clients have created a consolidated view. It is our opinion that this is likely overkill. Performance would always be worse in this consolidated view and we haven’t come across many use cases which use both the Live data sets and Historical. The Live being used for troubleshooting and the Historical for trend reporting.

As of Cognos Analytics 11.1.7, the Audit Database has grown to 21 tables. You can find more information elsewhere on the Audit Database, sample audit reports and the Framework Manager model. The default logging level is Minimal, but you may want to use the next level, Basic, to capture use requests, user account management and runtime usage. One way you can maintain system performance is by keeping the logging level to the lowest level required. Obviously, the more logging that is done by the server, the more overall server performance can be affected.

The key tables most administrators will be interested in are the 6 tables which log the user activity and reporting activity in the system. 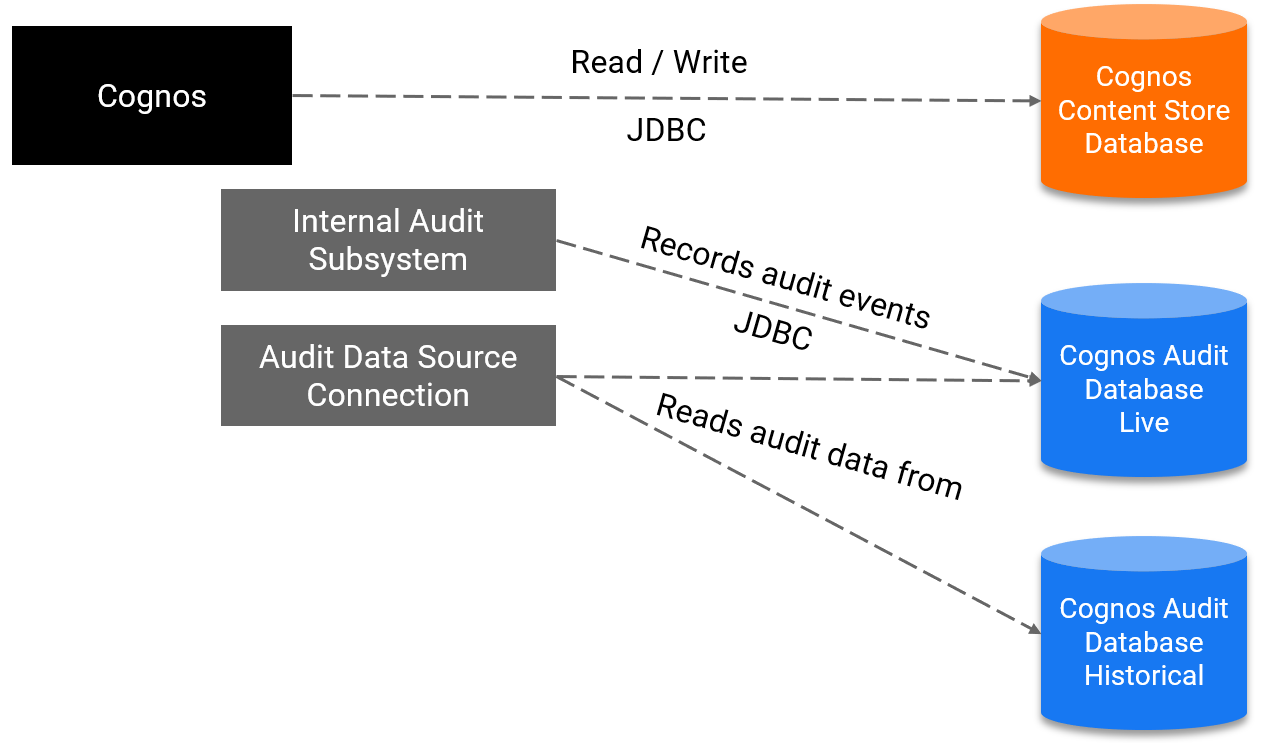 Different database types have different indexing types. A database index is a data structure, associated with a Table (or View), used to improve queries execution time when retrieving the data from that table (or View). Work with your DBA to create the optimum strategy. They will want to know the answers to questions like these to make the best decisions on what columns to index. Obviously, the database administrator could find out the answers to some or all these questions without your help, but it would take some research and some time:

Not surprisingly, these are the same questions that would need to be answered for improving the performance of any database tables.

IBM Support recommends creating an index on columns “COGIPF_REQUESTID”, “COGIPF_SUBREQUESTID”, and “COGIPF_STEPID” for the following tables to improve performance:

Plus on other less-used tables:

You can use this as a starting point, but I would go through the exercise of answering the questions above to arrive at the best answer for your organization.

The bottom line is that with the information provided here you should be well prepared to have a productive conversation with your DBA. Chances are good that she has solved similar problems before.

The proposed changes in Cognos Audit Database architecture will improve performance in both direct reporting as well as 3rd-party applications which rely on it, like Motio’s ReportCard and Inventory.

By the way, if you’ve had that conversation with your DBA, we’d love to hear about it. We’d also love to hear if you’ve solved the issue of a poorly performing Audit Database and how you did it. 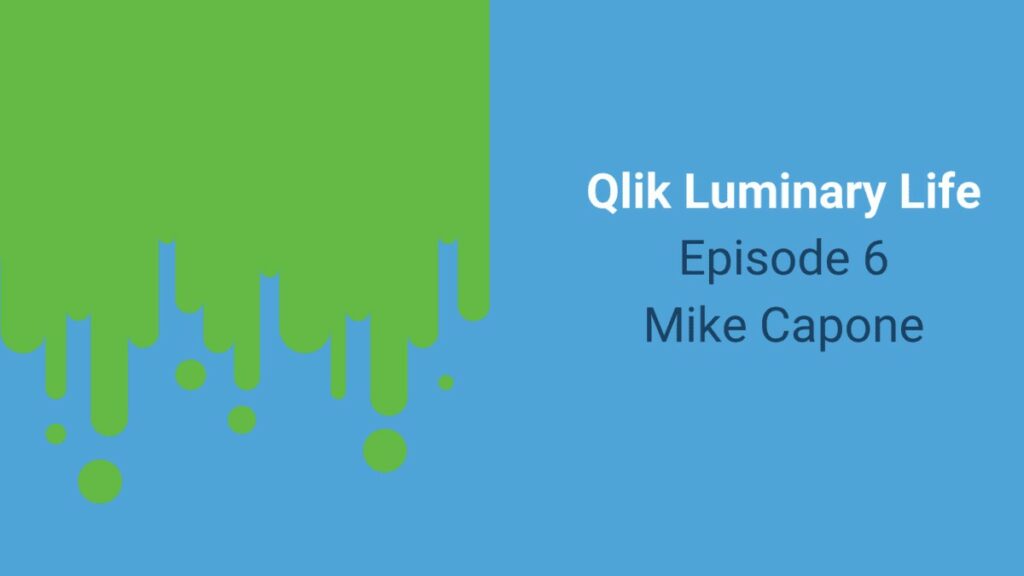 *Below is a summary of the video interview with Mike Capone. Please watch the video to see the entire interview.   Hey readers, welcome back to Qlik Luminary Life! This is episode 6 and we have a very special surprise guest for you today…Mike Capone, CEO of... In this special guest blog post, Chirag Shukla, a CITO in the insurance industry, will be our guide for all of the adventures, discoveries, and milestones his company encountered on their analytics journey. We’ll start with Excel and end at our final destination,... 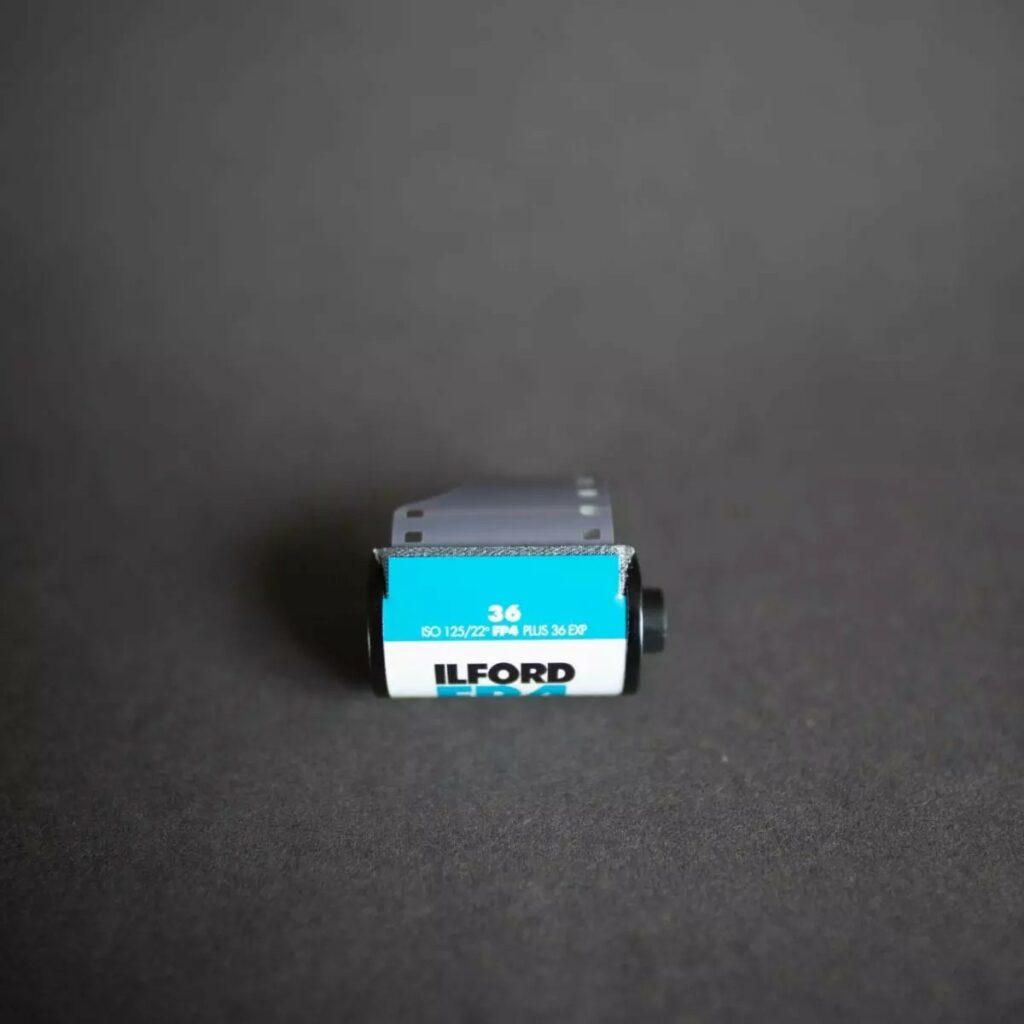 Instant replay has revolutionized the way we consume entertainment. Was his foot in bounds when he made that catch? Let’s timeout and consult the zoom lens! Wait, what did she say? Rewind and play that scene again! Did you really run a red light? Time to fire up... 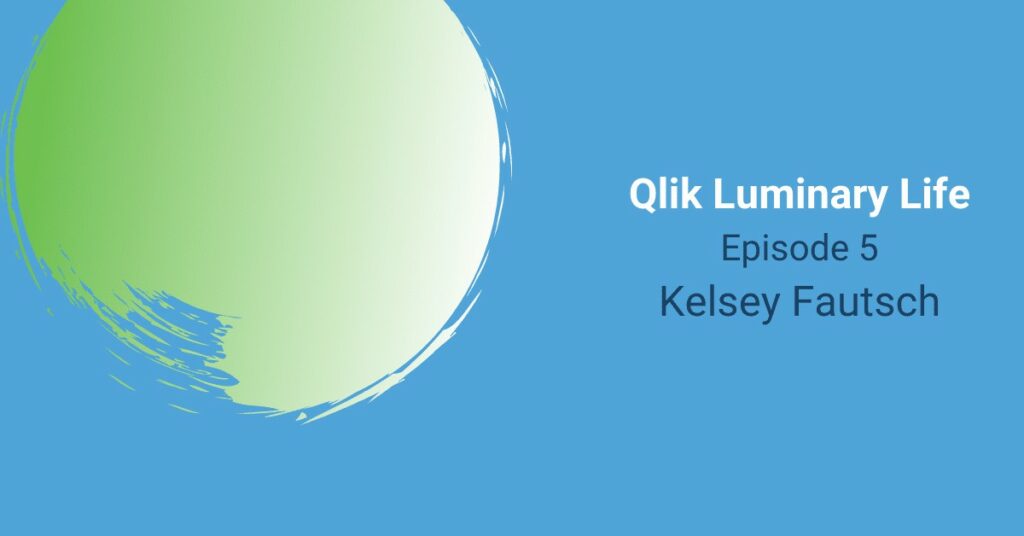 Welcome back to Episode 5 of Qlik Luminary Life! This week we caught up with Kelsey Fautsch to learn more about her previous 12 years of experience at Deloitte (*spoiler alert* SHE’S AVAILABLE FOR HIRE so if you’re reading this and looking for an MVP for your team,... 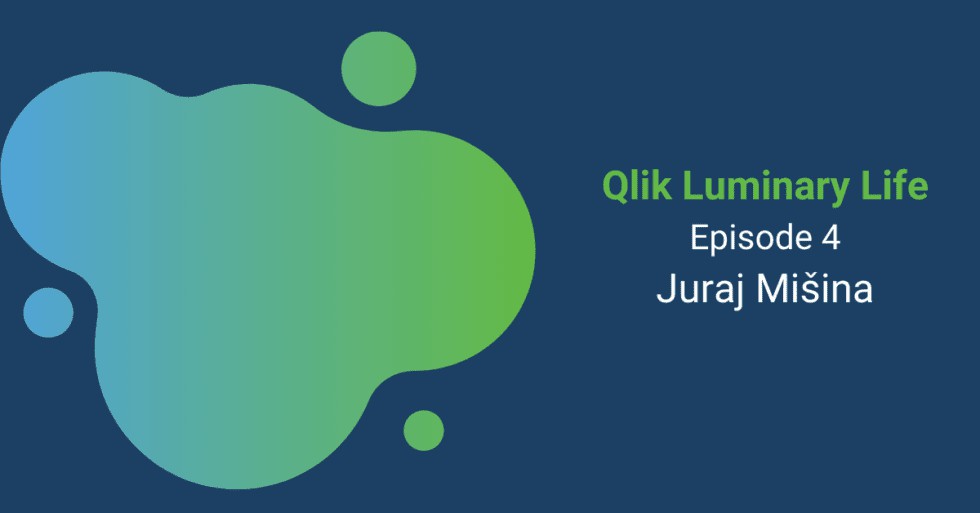 Episode 4 of Qlik Luminary Life is here! This week we had the opportunity to interview Juraj Mišina to learn more about what it’s like being a Senior BI Specialist at EMARK, one of the largest Qlik-exclusive consultancies in Central Europe, as well as a hobby... 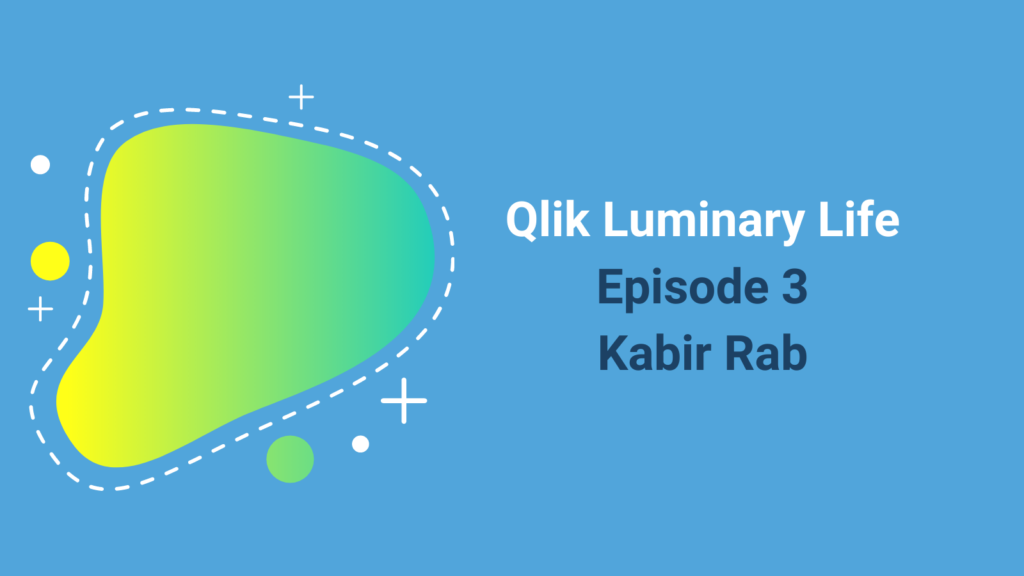 Welcome to episode 3 of Qlik Luminary Life! This week we caught up with Kabir Rab, solution architect at Tahola LTD to learn more about his data literacy workshop for kids, his love for the sport of cricket, and his advice for those wanting to become a... 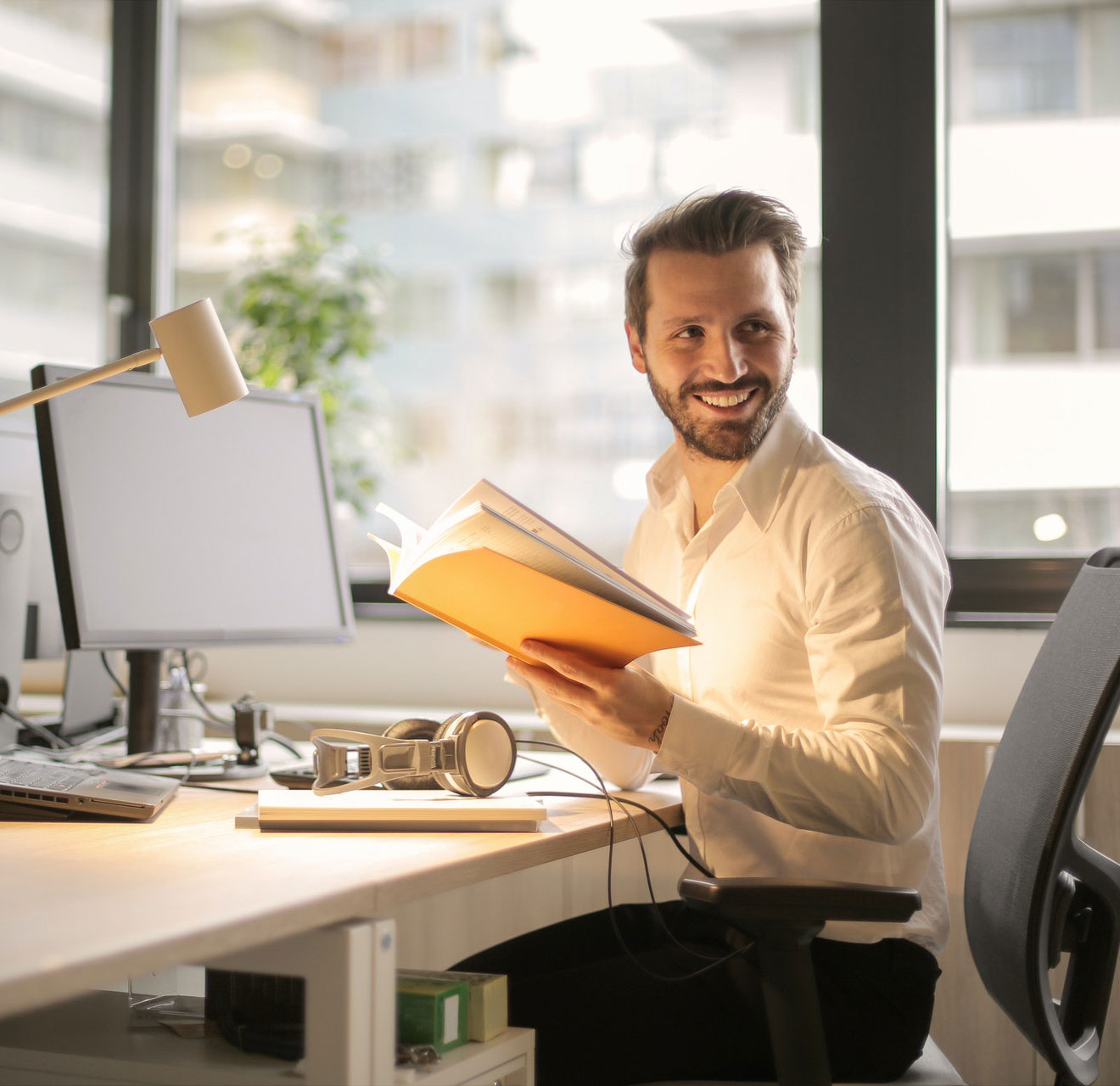